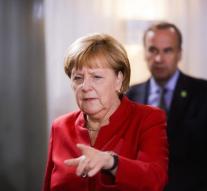 - Democratic presidential candidate Hillary Clinton admires German Chancellor Angela Merkel. \'I admire many leaders, but my favorite is Angela Merkel, because she has shown an extraordinary and strong leadership in difficult times,\' Clinton said Thursday.

Clinton said he was impressed by the courage with which Merkel has addressed the refugee crisis. She hopes once again to work with Merkel as president.