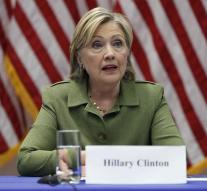 - Hillary Clinton should give written response from a US judge to questions from a conservative watchdog over her use of a personal e-mail server. Judicial Watch's request to be allowed to personally interrogate the Democratic presidential candidate was Friday rejected by the court in Washington.

The group brought proceedings on the basis of the Freedom of Information Act (Open Government Act), to enforce information on the overlapping activities of a confidante of Clinton. This Huma Abedin simultaneously worked for the Foreign Ministry, the Clinton Foundation and an external consulting firm. Clinton was foreign minister during that period.

Judicial Watch is the latest on October 14 to submit a list of questions. Clinton has been ordered by the court to answer the questions within 30 days. If the watchdog indeed wait until the last moment of handing over the questions, Clinton can until after the elections of November 8 refrain from answering.


The affair has its roots in Clinton's use of a private server for her mail when she was the top US diplomat, from 2009 to early 2013. For security reasons, they had the minister must use a public email address.

FBI chief James Comey said in July the use of a private server,, extremely imprudent ', but malicious he considered the question. His organization arrived in July, after a year of research, therefore, not to prosecute the opinion Clinton. The Ministry of Justice took the judgment.