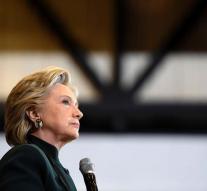 - The headquarters of the campaign of Hillary Clinton in New York was evacuated Friday night (local time) after it was discovered an unknown white powder in an envelope. Two trainees at the office in Manhattan discovered the powder letter and brought the envelope to the headquarters in Brooklyn, police said. That led to the evacuation of a floor of the building.

Four people have been exposed to the powder and to be examined. It was not yet clear the white stuff is exactly.

A week surfaced after the attacks of September 11, 2011 in the United States letters containing a powder that caused anthrax. Five people thus died.