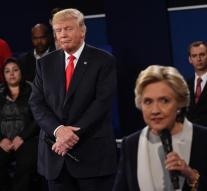 washington - Among other things, a television debate with Donald Trump during the election campaign, Democratic candidate Hillary Clinton has not been in the cold clothes. In her new book 'What Happened,' she confessed that she got a cheek when Trump followed her in St. Louis annoyingly after the stage, and kept her eye on her.

'We stood on a small stage and wherever I walked, he followed me, stared at me, pulled strange faces. I felt very bad at ease. He literally breathed in my neck, 'said Clinton. She wondered if she should not have told him 'mess up, creepy. '

In an audio clip of the book that MSNBC broadcast on Wednesday, Clinton describes her campaign in 2016 as 'fun, humble, raging and sometimes outrageous. 'She says she has dropped millions of fans by losing the November election against Trump.