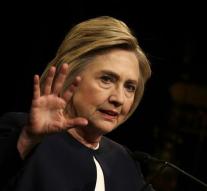 - Now that the election race at the US Democrats almost over, the party starts to prepare for the presidential election. Hillary Clinton is almost certainly the nomination and therefore it Friday already appointed campaign leaders in three key states: Florida, Colorado, and New Hampshire. These are swing states, there is no clear favorite and the results that can make the difference between profit and loss in the presidential election.

The campaign leaders have to prepare for the fight against the Republican candidate in their countries. The three states have already voted for the Democratic primaries. Clinton won in Florida, her rival Bernie Sanders won in Colorado and New Hampshire.

On other fronts, Clinton has been preparing for the presidential election. They enter next week campaign in Michigan and Ohio. There too the Democratic primaries have already been.

To be finally the candidate of the Democrats, Clinton 2384 delegates have to get behind him. She is now on 2156 votes. In other words, 90 percent is within.