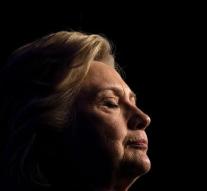 - The Democratic politician Hillary Clinton warned Thursday of the dangers of 'fake news'. 'It is now clear that so-called fake news may have consequences in the real world. Lives at risk, 'said the former presidential candidate.

The politician thus appeared to refer to 'pizza gate'. The creators of this conspiracy theory claiming without proof that Clinton and her campaign manager ran a pedophile network from a pizzeria in Washington. Then an armed man himself went out into the dining tent on research. He was arrested and no one was injured.

Clinton called fake news on social media 'an epidemic' and a threat that needs to be addressed. She called politicians and taking business measures 'to protect our democracy and innocent lives,' the Democrats.

Commissioner Frans Timmermans had earlier Thursday night a similar point about algorithms of Google and Facebook.