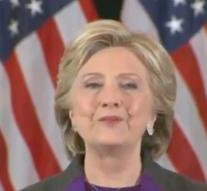 - Hillary Clinton hopes that Donald Trump is a successful president for all Americans. That said the Democratic candidate in her first speech after losing presidential elections. 'The American dream is big enough for everyone.'

'I know how disappointed you are,' Clinton said with a sob in her voice. 'We have seen that our country is more divided than ever. 'In order to add:' We need to Donald Trump an open mind and allow a peaceful transfer of power. '

Clinton said it hoped that Trump would monitor the values ​​of the USA as president, such as equality for everyone regardless of sexual orientation, religion or ethnicity, 'I'll make sure your voices be heard. '