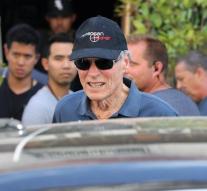 amsterdam - Perron 15B of the Central Station in Amsterdam was the deepest secret of the Clint Eastwood movie. The Oscar-winning director made the capital for Thalys for recordings of his terror drama.

Live Hollywood legend Eastwood is currently filming the despaired attack in the Thalys, which ran from Amsterdam to Paris on August 21, 2015. Three Americans- including two soldiers- and one British tourist overthrew that day a terrorist who had entered Brussels-South and wanted to kill a Kalashnikov, an automatic gun and a knife.

For four hours, nowadays 87-year-old- and apparently fragile-looking- filmed Eastwood some scenes. After which he stepped back into the Thalys towards Paris in the afternoon. Place of action was the daily departure point of the flash train to the French capital, occupied yesterday by a big film crew and dozens of figurants. Whether there were the Thalys heroes Spencer Stone, Alek Skarlatos and Anthony Sadler themselves, it is likely that they will launch their infamous Thalys trip together in Amsterdam. Certainty about this could not be achieved immediately because the strict security kept curious at a large distance and the international team of production staff pressed the lips stiff.

In The 15:17 to Paris, Stone, Skarlatos and Sadler play themselves, while the actors Max Ivutin, Bryce Geishar and Paul-Mikél Williams perform the starring men in their young years. Also known names as Judy Greer and Jenna Fisher (The Office US) were added to his cast.

The 15:17 to Paris is after The fault in our stars and The hitman's bodyguard is the third major Hollywood production that will be recorded in Amsterdam in four years. Eastwood's new film- which also does production- has to run in the cinemas in mid-2018.