Home / World / Clinic of MSF in Yemen hit by bomb 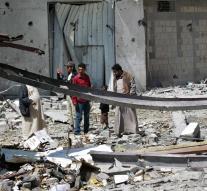 sadaa - A Yemeni hospital being run by Médecins Sans Frontières (MSF), has been hit by a bomb. According to a statement from MSF Tuesday the bomb was dropped during an air raid led by the Saudi air force in the city Sadaa.

Another bombing of a civilian target in the seven-month air campaign in Yemen, MSF had to know. During the attack, the hospital was manned by staff from MSF and were just patient present.

When the bombardment precisely place and whether there are casualties, it is not yet clear.

Earlier this month, an MSF clinic in Kunduz in Afghanistan hit by bombs. And wounded several deaths.