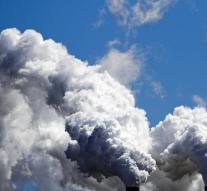 brussels - The suspected withdrawal of the United States from the climate agreement of Paris causes alarming reactions to Dutch parliamentarians. Although the decision is not yet official, it is also assumed in Brussels that the Americans will terminate their cooperation.

In the choice of Trump, Eickhout sees a reason for Europe. 'Soon, Member States will set their goals to reduce CO2 emissions, but for the moment they step on the brake and they are looking back in particular to not comply with the agreements made in Paris. ''

The European Commission has not responded yet.