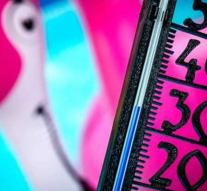 london - Warmer and extreme weather, linked to climate change is the greatest threat to public health on Earth in the 21st century. That's what doctors and researchers say in a report published in the British medical journal The Lancet.

Researchers come to the conclusion that storms, floods, wildfires and the emission of particulate matter are directly and indirectly threatening to people's health, but also ensure that areas become uninhabitable, which can lead to major social problems.