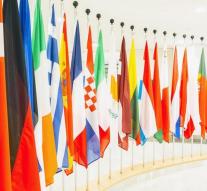 strasbourg - The European Parliament has overwhelmingly Tuesday in Strasbourg approved the ratification by the EU of the climate agreement in Paris. Therefore, the global treaty can come into effect this year.

UN Secretary-General Ban Ki-moon, especially for the ratification ceremony came to parliament, thanked the EU for 'the exemplary leadership. 'The 28 EU environment ministers gave last Friday joint green light for ratification before all national parliaments have ratified the treaty, including the Netherlands.

The treaty can come into force when 55 countries added together are responsible for at least 55 percent of global emissions have ratified the agreement. That is now the case.