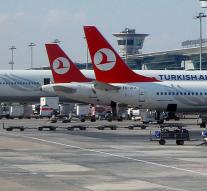 - Two cleaners have been injured by an explosion in a plane at Istanbul's second airport. It is a unit of the Turkish airline Pegasus Airlines. The cause of the explosion is still unknown.

Police conducted after the incident security measures at the entrances to the airport, reported state news agency Anadolu Wednesday morning. Sabiha Gökçen Airport, which is located in the Asian part of Istanbul, the traffic is not closed.

The cleaners would be one seriously wounded in the head. Others suffered injuries in a hand. Both were taken to hospital.