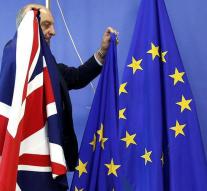 brussels - The European Parliament on Tuesday adopted a resolution in Brussels in which the British prime minister called,, without delay, 'the other 27 EU leaders to be informed of the intended departure from the EU Britons. The 28 heads of government and heads of state on Tuesday and Wednesday in Brussels to meet the Brexit and hear from Prime Minister David Cameron what his lineup.

The parliament wants London,, immediately 'the article that the withdrawal from the EU triggers, running,, to prevent damaging uncertainty for all and to protect the integrity of the Union.' Once officially notified of the separation plan negotiations should start on that.

The European project must now be re-fueled, says the resolution.


The two-hour debate before the vote ran turbulent and emotionally. UKIP leader Nigel Farage, one of the leaders of the Brexitcampagne, was greeted with catcalls and boos.

,, I never thought that someone from this house Nazi propaganda would use in the campaign, 'said the Liberal leader, the Belgian Guy Verhofstadt.,, The most shocking is not the choice of the UK population, but the climate of fear and negativity that was created. 'He also told Farage that the EU now afraakt of,, the biggest waste in Europe: your salary. '

The leader of the largest political group EPP, the German Christian Democrat Manfred Weber, first lashed out at the Eurosceptics:,, You should be ashamed. ' He then put his hand in his own bosom:,, I have been silent for too long, but that's over now. We must fight for a united and strong Europe. '


PVV MEP Marcel de Graaff said the Brexit,, the beginning of the end of this failed project.,, The process of dismantling these 'evil union 'should begin as soon as possible. '

Sophie in 't Veld (D66) provides lengthy negotiations.,, In these uncertain times is a broad statement of the European Parliament urgently needed. It is important that the parliament does not create more uncertainty in Europe than there already is. '