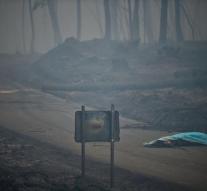 lisbon - The immense forest fire in the Pedrógão Grande region proves that civil protection in Portugal is not up to such natural disasters. That says Paulo Fernandes, professor of forestry at the University of Vila Real against the newspaper Público.

See also: 'When it's going to blow up, are we the scooter?'

There are limits to what the Civil Protection can do, but it is not suggested that the roads can not be closed in time, says Fernandes. 'Civil protection is lacking technical knowledge and knowledge about forest fire. It's really crazy for words when I say politicians say the behavior of these fires is unpredictable. That's really not true. '