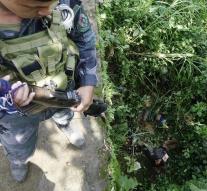 marawi - The bodies of eight workers were found in a ravine just outside the Philippine city of Marawi. They are probably executed by extremists.

Part of the city on the island of Mindanao has been in the hands of the extremists of Maute for almost a week. The Philippine army has been trying to expel the rebels for days.

The eight dead men, most with bullet wounds in the head and some with tied hands, were workers who were in flight for the fights. They were arrested by the militants and killed, police informed. At one of the bodies the text 'traitor' was written.