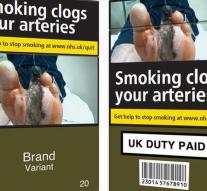 london - Cigarettes in the United Kingdom can only be sold in a neutral green-brown package from Sunday onwards. The rule already entered last year, but manufacturers were still able to invent their old stocks.

The mark may only be mentioned in letters. The health warnings now cover almost three quarters of the front and back. From 21 May, a ban on cigarettes with a taste will also apply. In addition, there is a minimum number of cigarettes of twenty pieces per package.

In Australia, the blank package has already been introduced in 2012. Since then, the percentage of smokers among the Australians has fallen by more than half a percentage point.