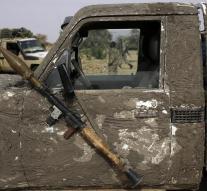 - Arms for Syrian rebels who were shipped by the CIA to Jordan and Saudi Arabia, are stolen by people inside the Jordanian intelligence and resold on the black market. That schrijftop citing sources in the US and Jordanian authorities. The newspaper conducted the research in collaboration with Al-Jazeera.

Jordanian officials steel include Kalashnikovs, mortars and rocket launchers. With the widespread looting weapons were involved millions. The theft came to light by arms dealers in Jordan began to brag about their new merchandise. The amateur arms dealers within the intelligence used their millions especially for luxury products, such as SUVs and new iPhones.

The initiative to arm and train called rebels in Syria Timber Sycamore and began in 2013. The choice of Jordan as a training location was a logical, given the close ties with the government and the proximity to the Syrian arena. Large parties weapons were bought, mostly in Eastern Europe, and it was the Jordanian intelligence agency GID to arrange transport. Or the head of the GID, Gen. Faisal al-Shoubaki, the theft was aware is unclear, but several Jordanian sources told the New York Times that senior officers knew about it and kept their subordinates from the wind.