Home / World / CIA talks to parliament about Trump and Lavrov 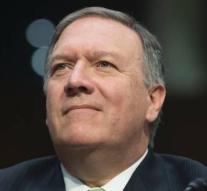 washington - The chief of the CIA, Mike Pompeo, talks to members of the committees on Tuesday evening of information from Congress. This reported the news site Politico Tuesday.

It is assumed that Pompeo talked to them about the talks held by President Trump last week with the Russian Foreign Minister, Sergei Lavrov, and Ambassador Sergey Kisljak. On Tuesday, The Washington reported that Trump made a top secret about the fight against Islamic state. That could possibly have jeopardized a US ally and its sources in the Middle East.

The US government contradicted that Tuesday. At a press conference, the National Security Advisor Herbert McMaster also said Tuesday that Trump had not spoken about sources, methods or the way information intelligence was conducted with Lavrov in his interview.