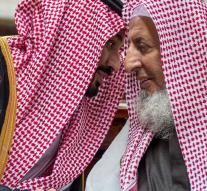 riyad - The United States has recordings in which Mohammed bin Salman orders the murder of Jamal Khashoggi. That writes the Turkish newspaper Hürriyet.

The CIA would have listened to a telephone conversation between the Saudi Crown Prince and his brother Khalid bin Salman, who is the United States ambassador. In this they complain first about Khashoggi's criticism of the kingdom, after which MBS says that the journalist 'should be silenced'. CIA director Gina Haspel would have mentioned the existence of the recordings during a visit to Ankara last month.