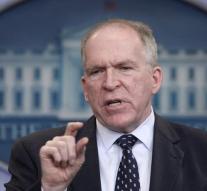 - If it is up to the director of the CIA, is never used water boarding. Even if a future president tell it to. That said CIA Director John Brennan Sunday across NBC News.

The controversial interrogation technique in which a defendant believes he is drowning, was banned under President Barack Obama, after his predecessor George W. Bush did use the method in its fight against terrorism. Republican presidential candidate Donald Trump and Ted Cruz during the election campaign showed more extensive interrogation techniques would apply again. Trump said taking water boarding explicit.