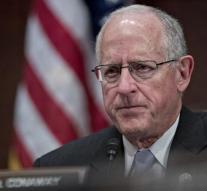 washington - Former CIA director John Brennan discussed the alleged Russian interference in the US presidential elections last year with Moscow. He briefly considered the matter with Alexander Bortnikov, the head of the Russian security service FSB.

Brennan said during a hearing of the US Parliamentary Information Commission's inquiry that there was no doubt in his eyes that Russia was in a 'shameless' way in the election last year. 'They did not do it despite our powerful protests and explicit warnings. ''

The former chief of the foreign intelligence service said he was probably the first US official to talk about the alleged interference with Moscow. He warned Bortnikov in early August that his relationship with Washington would be under pressure by such practices.

The FSB boss denied during the conversation that Moscow tried to influence the polls in favor of Donald Trump. Brennan then informed President Barack Obama and other top officials about his findings.