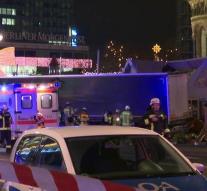 'Terrible. We have had no reports of Dutch victims. But our agencies keep a finger on the pulse, 'said Oostdam.

It involves hundreds of Christmas markets that are visited in Germany, Belgium and the Netherlands. It is estimated that now a few thousand Dutch tourists in Berlin.

'Short breaks are doing well. Some go cared for on a group tour by bus to Christmas markets, others on spec by car or plane, 'said Oostdam.

Terror, he says 'unfortunately become a fact of life. Whether it's at Christmas or on other dates and places. We unfortunately have to live with it. '

Berlin Christmas market at the famous Memorial Church is one of many in the city and walk around the most traditional in the city center, where usually most tourists.\n  \n  \n   advertisement

Berlin is in the top 5 busiest and best Christmas markets in Germany, in addition to Cologne, Aachen, Dusseldorf and Oberhausen, where are always many Dutch.