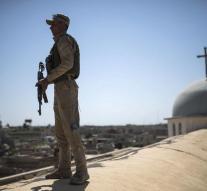 mosul - Iraqi Christians in eastern Mosul for the first time in three years again Easter celebrate. Sunday morning rang the bells of dozens of churches. In the courtyard of a church in northern Mosul told a French aid agency after the Eucharist soda and colored eggs from hundreds of believers.

Mosul came in June 2014 at the hands of Islamic State (IS). Christians were forced to convert to Islam, pay money for 'protection' or else leave the city.

IS still the densely populated old town of western Mosul in hands. Iraqi forces conducted an attack Sunday in an attempt to break the stalemate. The military has in recent months made scant progress on the offensive earlier eastern Mosul freed of terror.

Under former dictator Saddam Hussein survived an estimated half million Christians in Iraq. Fearing persecution and violence many have left the country.