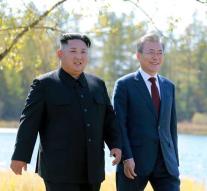 oslo - The Nobel Peace Prize, awarded on Friday, is one of the most important political rewards that is being forgiven in the world. This year, the choice seems more difficult than in other years because it is not clear how sustainable current peace initiatives will be.

For example, South Korean President Moon Jae-in and North Korean leader Kim Jong-un are candidates. They provided a diplomatic highlight when they walked hand in hand through the border town of Panmunjom. The peace talks between the two are seen as the breakthrough in international relations of the year. But the person of Kim, who conducts an iron regime and until recently threatened the whole world with an atomic war, is of course anything but undisputed.

Another candidate seems to be the prime minister of Ethiopia Abiy Ahmed, who this summer signed a compromise with Eritrea from across the border between the countries. It is not certain how long there will be peace.

Other names mentioned are the UN World Food Program, the Turkish newspaper Cumhuriyet and the persecuted chief editor Can Dündar and the Congolese doctor Denis Mukwege. The latter has been seen as a contender for several years because of his fight against sexual violence.

Last year, the Nobel Peace Prize went to the International Campaign for the Abolition of Nuclear Weapons (ICAN).