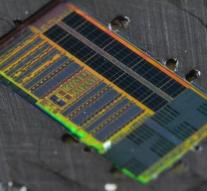 - Researchers at the University of Colorado have demonstrated a working microprocessor which uses light instead of electricity for the transmission of data at high speed. The technology could lead to more powerful computers and network infrastructure.


'On light-based integrated circuits could lead to radical changes in chip architecture in applications ranging from smartphones to supercomputers and large data centers,' says scientist Miloš Popović who has been working for several years on the technology.
Traditional microprocessor chips that can be found in, among other laptops and supercomputers use electrical circuits to communicate and exchange information. The enormous amount of electricity that is required for the ever higher speeds and volumes of the data transmission in recent years proven to be a limiting factor.
Photonics which is light-based technology may be the solution to this problem. By sending data via light instead of electricity through the energy charge of the microchip is reduced because light can be transmitted with the same amount of energy over long distances.
The new chip has a bandwidth density of 300Gbps per square millimeter, which is about ten to fifty times greater than today's microprocessors. The current design measures 3 millimeters by 6 millimeters and has only two cores.
Computer Scientist Vladimir Stojanović at the University of California, Berkeley, who is leading the research, says a milestone. 'It is the first processor that can use light to communicate with the external world. No other processor photonic input / output components in the chip. '
The new technology can be integrated without difficulty into existing manufacturing processes because the chip combines the optical circuit and electrical circuit on a single chip. The chip can consequently also be easily scaled up for commercial production.
NEW