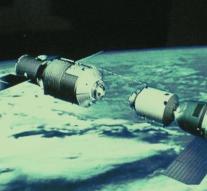 cambridge - A 8.5-ton Chinese space station, which has become unmanageable, comes closer to Earth and can crash over a few months.

The Tiangong-1 or 'Heavenly Palace' was launched in 2011 and was used to send both manned and unmanned missions. Last year, however, it appeared that China lost control of the station. It is expected to fall between October this year and April next year.

'Now it's only 300 kilometers from the Earth and comes closer, the station's decay is getting faster,' said the astrophysicist astronaut Jonathan McDowell of the Harvard University on Friday against the British newspaper The Guardian. 'I expect it to come down in a few months. '