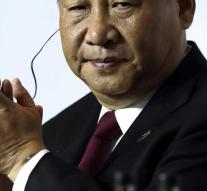 shanghai - Chinese President Xi Jinping will visit Pyongyang next month at the invitation of North Korean leader Kim Jung-un to celebrate the seventieth anniversary of North Korea's founding. That reports the Singaporean newspaper The Straits Times.

It will be China's first visit to the North Korean capital since he came to power in 2012. Xi's predecessor Their Jintao visited the neighboring country in 2005 as the last Chinese president.

The Straits Times did not write how it came to the information about the visit. The Chinese Ministry of Foreign Affairs did not want to respond immediately. North Korea celebrates the anniversary on 9 September.

China is the most important trading partner of North Korea. Kim has visited China three times this year so far, where he spoke with Xi about improving cooperation between the two countries and economic reforms.