Home / World / Chinese fishing boats at the chain in Africa 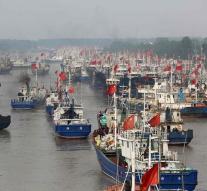 dakar - West African countries have imposed eight Chinese ships on suspicion of illegal fishing. The fines for such violations can run in millions, say Greenpeace and government officials.

Inspectors from Guinea, Guinea-Bissau and Sierra Leone discovered during inspections that the crews of the vessels were guilty of the capture of protected fish species. Greenpeace played a key role in the controls. The environmental organization gave inspectors an elevator on board the Esperanza vessel, because national governments in West Africa often hardly can maintain their resources due to a lack of resources.

In total, 37 ships were checked for two months, of which eleven were found to be in violation. There are many fishy waters in front of the coast of West Africa. However, according to Greenpeace, they are emptied by huge trawlers who sometimes operate illegally.