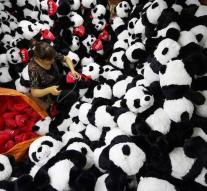 - Chinese exports grew less strongly than expected in August. That was apparent from customs figures on Friday.

Exports increased by 9 percent, where economists accounted for almost 11 percent. Export growth is well over a month earlier. In August, exports still dropped by 5.5 percent.

Imports dumped by 19.5 percent, more than the forecast of 16.5 percent. In addition, it was counted in yuan. The trade surplus came to 193 billion yuan.