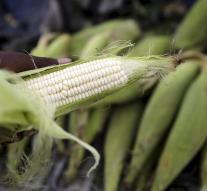 - The director of a Chinese company located in the United States, has confessed that he was 'high-tech American corn seed 'has been stolen. The 46-year-old Hailong Mo gave his deed to the federal judge in the state of Iowa.

Mo confessed that he had wanted to bring the company's valuable patented seed DuPont Pioneer secretly to China. However, he was caught by security personnel. Remarkably was Mo's sister Yun nearly two years ago, also caught when she tried to steal patented American seed.

For how long Hailong Mo disappears behind bars, will be determined later by the court.