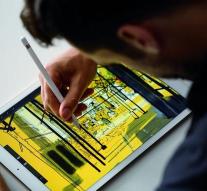 - It seems that the iPad Pro, the largest tablet from Apple to date, no success in China. In the first month after its launch in November, there are about 49 300 iPad Pros activated, reports Mashable.


The technology site relies on data from market research Talking Data. By comparison, a month after the launch of the iPad Air 2, which was released late last year, the numerator in China rose more than 557. 000 activated tablets. That is more than ten times as much as now the iPad Pro. In September appeared iPad mini 4 (over 92 400 activations in the first month) also fell more taste.
Analyst Ann Tao Talking Data does add a comment on the figures. According to her, must also be borne in mind that the iPad Pro is quite expensive. The basic model of the 12.9-inch tablet will cost in China 5888 yuan (about 830 euros).
NEW