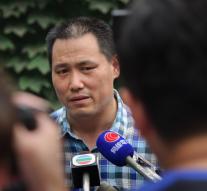 - The renowned Chinese human rights lawyer Pu Zhiqiang was Tuesday sentenced to a suspended sentence of three years. Pu, according to the court include incited ethnic hatred.

Pu had to appear because he had criticized on social media on the Communist Party and the policy on Muslim Uighurs. The lawyer since his arrest has been about nineteen months in jail.