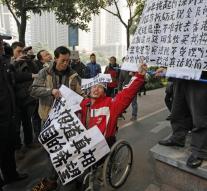 - A prominent Chinese human rights activist Guo Feixiong, Friday has been six years in prison. The conviction is part of a national campaign for human rights defenders to silence, said his lawyer Zhang Lei.

Two others, Liu Yuan Dong and Sun Desheng, were respectively three years and 2.5 years in prison. Guo and Sun were sued because they " crowds had gathered to disrupt society " during a peaceful demonstration in January 2013 for the building of a newspaper in southern China. The demonstration, the activists wanted to call the authorities to respect press freedom.

" He is absolutely nowhere to guilty. The conviction is unacceptable and unfair ", said Zhang.