Home / World / China's most wanted fraudster give up 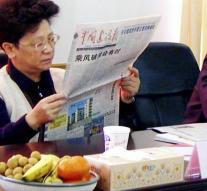 - The most wanted suspect corruption in China has returned after thirteen years in her homeland to touch. Yang Xiuzhu, former vice mayor of Wenzhou city, landed Wednesday on a flight from the US She is on the first place of China's list of wanted persons in connection with corruption.

Yang (70) fled China in 2003 after the authorities had started an investigation into millions in bribes they would have assumed. She fled through including France and the Netherlands to the US