Home / World / China worried about US missiles in South Korea 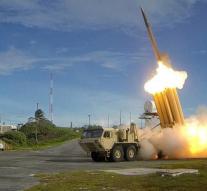 peking - China is deeply concerned about the South Korean announcement by continuing to install another four additional American anti-rocket systems of the THAAD type. This will not improve South Korea's security and make things more complex, said the Chinese Foreign Ministry on Saturday. It repeated the call to withdraw the rocket system.

North Korea earlier announced that it had once again conducted a successful test with an intercontinental ballistic missile (ICBM), which has proven to reach the entire United States permanent country.