Home / World / China will not talk to Taiwan 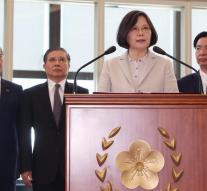 - The Chinese government has drawn a line through the communication with Taiwan. Beijing is angry because the government of the island refuses to recognize the one-China principle. China regards Taiwan as a renegade province.

In addition, the government in Beijing is not exactly welcomed Taiwan's new president Tsai Ing-wen, which took office in May. China thinks that she will be pressing for full independence. Tsai is the leader of the Democratic Progressive Party for independence.

In 1992, the government confirmed in Beijing and Taiwan formally that there is only one China, while both countries have implied their own interpretation on the principle of control. The Chinese state news agency said Saturday it is time that Tsai Ing-wen, the principle endorsed publicly.