Home / World / China: We are not a solution in Korea 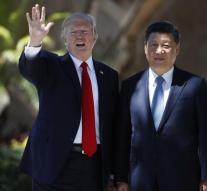 peking - China is not the key to solving the problem North Korea. That said a spokesman for the Foreign Ministry on Friday against media in Beijing.

He warned of excessive expectations of China's ability to resolve the conflict around the North Korea nuclear program. 'We did not sharpen the conflict,' said the spokesman, adding that joint efforts are needed.

The spokeswoman did not want statements from the US Secretary of State Rex Tillerson to confirm that China has threatened North Korea with sanctions in case the neighboring country does a new nuclear test. China is still supporting UN sanctions and has always advocated the dialogue to resolve the problems, according to the spokesman.

Trump said Friday in an interview that 'a major conflict' with North Korea is possible, failing diplomatic solutions. But Senator John McCain added that the American leader understands that military action is a last resort.

'There is a chance that we can have a big, big conflict with North Korea. Absolutely, 'said Trump against Reuters press office. 'We like to solve things diplomatically, but it's very difficult. 'In the interview, he praised Chinese President Xi Jinping for his efforts to push pressure on North Korea.

About South Korea, Trump said that the country should pay for a missile defense system at its bottom and threatened to possibly delete a trade treaty with the country.