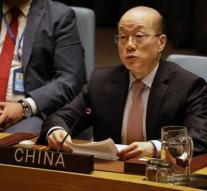 new york - The Chinese ambassador to the United Nations has urged North Korea to stop its 'wrong actions'. All parties involved should agree with China's proposal to suspend the North Korean missile program and military exercises of Americans and South Koreans.

Liu Jieyi resigned Monday at a Security Council in New York. The situation should not deteriorate further. The parties must therefore return to the path of dialogue, so Liu kept his audience.