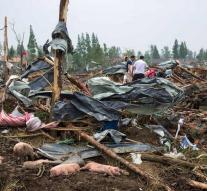 - The death toll from the violent storm on Thursday (local time) raged in eastern China, has risen to 98.

Wind gusts reached speeds of 125 kilometers per hour and there was a tornado. Especially in and around the city of Yancheng, a few hours drive north of Shanghai, the damage was considerable. Power masts snapped, cars were tossed on their sides and roofs of houses torn. The government has sent relief supplies and thousands of tents to relieve the immediate needs of the population.


President Xi Jinping, visited Uzbekistan, called for a comprehensive relief operation and instructed his government to send a team to coordinate action.