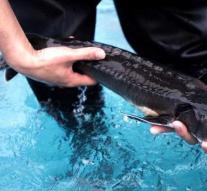 shanghai - China has stopped building a bridge over the Yangtze River in Hubei province, after the work would have resulted in the deaths of about six thousand endangered sturgeons.

A research team discovered that the construction project in the city of Jingzhou would have affected a nature reserve, reports the newspaper Daily Daily after information from the Ministry of Agriculture. The fish were grown in a basin in the river. The dying of the sturgeons would have been caused by the shocks, the noise and the change of the water sources caused by the construction project.