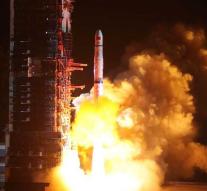 shanghai - China has launched a communication satellite named Queqiao Monday morning (local time) to establish a connection between a probe that is present on the dark side of the moon and the earth.

The satellite floats in orbit at an average distance of 455,000 kilometers from the earth.

China will be the first country to have a probe on the unknown side of the moon and will investigate that area extensively.

The project fits in with China's ambition to become a leading space authority in the world by 2030. Next year, China will start with the construction of a manned space station.