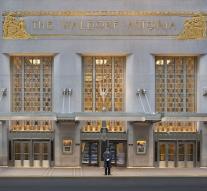 - China ranks this year with € 175 billion to the largest investors in European and American companies. The wave of acquisitions will decrease.

This appears according to Reuters and Bloomberg signals out of state, which encourages investment in their own country.

A year earlier, the investment across the border even € 100 billion. An iconic investment was that of the state-sponsored insurer Anbang, previously active at Fortis, which for € 6 billion Strategic Hotels \u0026 amp; Resorts took over. Anbang previously bought the Waldorf hotel in New York.

Foreign investment in China remain close to € 108 billion. The Chinese Ministry of Finance will close the gap by Chinese companies to invest across the border to move to stabbing more money domestically to keep up to date growth.

In addition, foreign companies have more opportunities to invest in China. In a blog reports the ministry also reduce the number of trade restrictions and to push for 'enhanced cooperation' with foreign companies.

Last year there were already rumors that the number of mergers and acquisitions will be reduced. But recently took it by the Chinese state-backed China General Nuclear a 30% stake in the nuclear plant Hinkley Point C in the UK with a total value of € 28 billion.