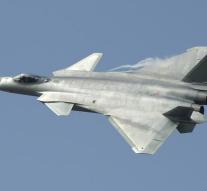 - China said Tuesday its new fighter aircraft with stealth technology officially presented. The state media reported that two aircraft of type J-20 flew a few laps during a show in Zhuhai in the south of the country.

The development of a proprietary fighter jet which is difficult to detect by radar systems started five years ago. That was an important part of an ambitious program to modernize the Chinese army. President Xi Jinping announced last year, the number of stand-by troops with 300 000 troops to bring back to 2 million and instead invest in technologically advanced weaponry.

The air show was the new military transport plane Y-20 to see and CH-5, the largest drone over which China has for offensive operations. Beijing not only puts a lot of money in the Air Force, but also in the Navy. Currently, China's first aircraft carrier is built.