Home / World / China optimistic about trade with US 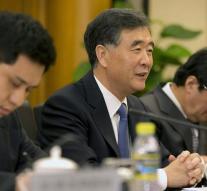 - Chinese Vice Premier Wang Yang is optimistic about the future trade with the United States. He said Tuesday. Although US policy toward China is uncertain, Wang is confirmed in his optimism by the enthusiasm of the American business community for trade between the two countries.

During a lunch with Chinese and American businessmen said the Deputy Prime Minister that companies and the US government ' will ultimately make the right choices 'in order to reap the benefits of market opportunities in the Chinese economy. ' As the elections have to wait and difficult to predict what will the US government. ''

Wang's statements come at a time that Donald Trump have made clear once again in a video message that the US will withdraw soon from the trans-Atlantic free trade agreement TTIP. China does not participate in the agreement and has suggested a private treaty without Washington but might now be able to respond if the US actually retires.