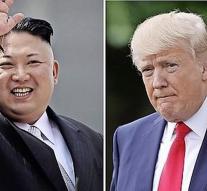 peking - If the United States decides to attack North Korea, China must defend its neighboring country. And the country must stay neutral should North Korea be the first hit, the Chinese state newspaper writes Global Times.

The well-read newspaper pleads for maintaining the status quo on the Korean peninsula. Because in Korea, the strategic interests of all parties come together. And nobody should try to dominate the region.

According to the editorial comment, China has to come up with a strong counter-reaction when Chinese interests come to an end. If the US and South Korea decide to overthrow the regime in Pyongyang, China will try to prevent that, according to the newspaper.

China is the most important ally of North Korea, and since tensions have risen, the country calls for peace of mind. The country recently agreed with new sanctions against North Korea.