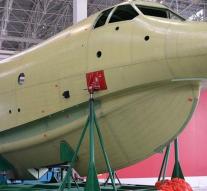 guangzhou - Society for the Aviation Industry of China (AVIC) on Saturday launched the largest seaplane in the world.

The device, the AG600 is intended, inter alia for controlling forest fires and rescue on the water. The first type is Saturday in Zhuhai, next to the former Portuguese Macao, rolled out of the factory.

State news agency Xinhua reported Saturday that according to AVIC and aviation observers a new milestone in China's aerospace industry, which has the ambition of American and European manufacturers to stabbing to the crown.


The AG600 is 36.9 meters long and the span of the wings is almost two meters longer. The unit is powered by four turboprop engines built under Russian license in China (Ivtsjenko AI 20). For combating forest fires, the AG600 has a 'belly' but which can in no less than 12 tons of water.