Home / World / China is looking at the back of the moon 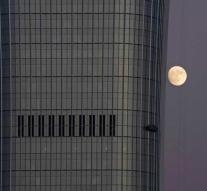 beijing - China has launched a spaceship towards the back of the moon. It is the first time that a country has started such a mission. The Long Mars 3b missile with the Chang'e 4 probe departed Friday from a start platform in South China Xichang.

According to state media, the Aitken crater on the moon is the purpose of the trip. The crater is named after an American astronomer. A robot will then examine the area around the site.

Sowing is also included in the probe. China wants to investigate whether vegetables can grow on the moon in an enclosed environment and with less gravity.