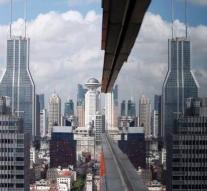 beijing - China has now reached a landmark 102 cities have more than one million inhabitants. The biggest is Shanghai, where over 22 million people live. The whole country is home to about 1.4 billion people. The earth has a total of 7.3 billion residents.

The growth of Chinese cities is impetuous. Experts from the US McKinsey Global Institute expect that already in 2025 the number of megacities will be more than doubled to 221. One of the reasons for this rapid growth is that the government actively encourages people in rural areas to attract the cities. Around 2020, 60 percent of Chinese live in a town, about 4 percent more than now.

The rapid growth of cities means explosive activities. Not only houses, but also roads and tracks for high speed trains shoot like mushrooms from the ground. Cities often provide as looks a series of high-rise flats, as far as the eye. In the new metropolises, writes The Guardian, the search will be to the traditional Chinese character.

By comparison, Amsterdam has around 850 000 inhabitants.