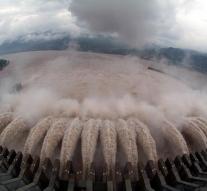 - In a rock wall in the Chinese province of Hubei, 131 'hanging ' coffins were found. The crates are supposedly 1200 years old and were placed in rectangular cavities that had been made in the rock.

The crates have been found near the Three Gorges Dam, reports the newspaper South China Morning Post Tuesday.The coffins come from the era of the Tang Dynasty (618-907) and were probably the minority group Bo. It is unclear how the boxes were lifted by the 100 meter high cliff.The special burial ritual were the survivors, bodies were eaten by wild animals.Elsewhere in China are also such pending cases found. According to Chinese media officials sometimes pray at those locations, as the pronunciation of the word for 'hanging coffin "sounds the same as' promotion to the officer."The Three Gorges Dam is the largest hydroelectric power station and dam in the world. The construction in the Yangtze River began in 1994 and cost has translated more than 35 billion euros. Certainly 1.2 million people had to leave their homes before.The Three Gorges Dam is at the end of a water reservoir of 600 kilometers in length, which lie 1300 archaeological sites. Among them are also sites of pending cases.
NEW